The broadlink e-control was built to control broadlinks line of IR/RF emitters. These devices are fairly inexpensive and given what they were built for, the homeautomation community has already created support for the broadlink IR/RF switches. The purpose of this post is not to find or create something new, but to demonstrate the process of how to tinker with IOT devices and their companion android applications. My goal for this post is to find the coughs spoiler coughs 128 bit aes key and iv.

Here is the resulting file structure

Now a quick explination of the aformentioned jargon. The AndroidManifest.xml is an Andriod binary xml file that contains information about the apk. Most importantly it contians the permissions of the application; which is useful if you are reverse engineering malware. The META-INF directory contains more metadata. The res directory has non code resources and lib has thirdparty or system libraries (non java). The classes.dex file is the compiled java byte code that will run on the dalvik vm (Androids JVM implementation). In the case of the broadlink e-control application, what we care most about is the classes.dex and the lib directory.

Next we can use jadx to decompile the apk into a new directory; out in this command example. jadx -d out classes.dex Next we can start poking around the decompiled code. While browsing the source code a few files and directories stood out. Notably:

And now onto reverse engineering the code.

The first off is the NetworkAPI java file. This file wraps a system library; which means that we get to reverse some arm assembly. Under the lib directory there is a file called libNetworkAPI.so which is an android shared object. Next, we can open up the NetworkAPI shared object into ghidra. After opening the shared object with ghidra I started by searching for xrefs on the socket function. I found a function called bl_device_send_data. This function is the lower level version of another function called networkapi_device_send_data. Luckily for us the broadlink developers left several debug messages that help in identifying functions that ghidra did not detect. While reverse engineering the network stack I discovered two things.

It should be noted that there are other interesting things in this binary, but for the sake of keeping this short I will focus on getting the key and IV. While performing static analysis on the shared object I was able to find the IV in the decompilation of the function data_aes_decrypt. 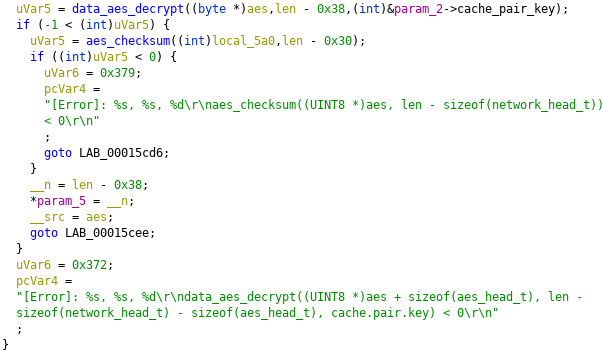 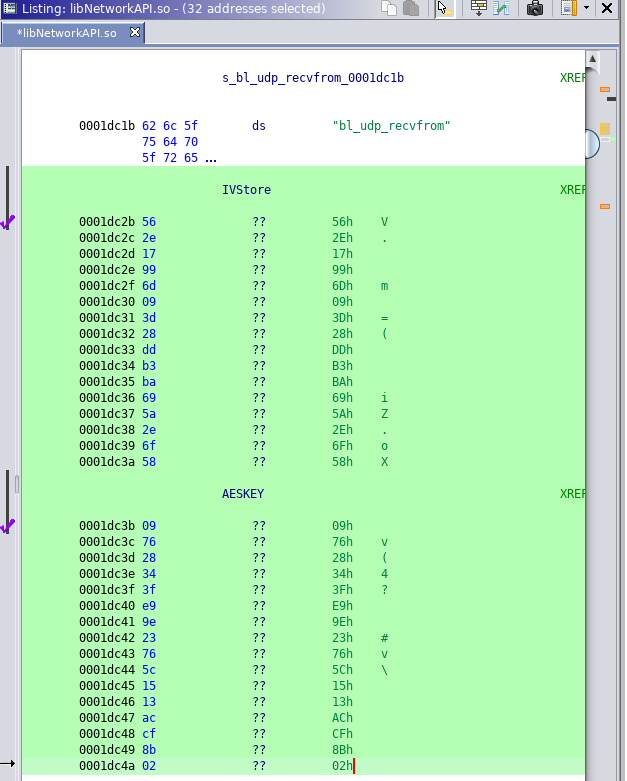 The broadlink device has already been reverse engineered and the entire api has been reimplemented in python. This is very helpful because instead of writing a script to test my findings I can read the already existing documentation. The documnetation can be accessed here. Sure enough the key and iv I found were correct.

While I did not make any ground breaking research, I was able to go through the process of reverse engineering a production android application. I was able to gain more hands on experience with ghidra and the ARM platform. Most importantly it was a fun challenge and a nice change from mostly reversing CTF challenges.